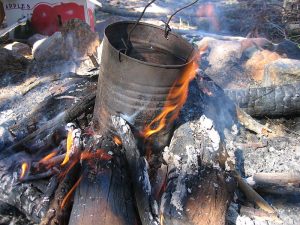 THERE is an interesting history connected with the Australian billy-can. The story dates back to the early gold-mining days of Victoria, when food was fairly difficult to procure and still more difficult to take to the diggings. It was found necessary to import from abroad large supplies of preserved pro-visions—tinned meats, stews and soups, &c. Among such supplies were cases of canned meats from France. These tins, branded -“Bouilli,” contained meaty mixtures and thick, soup-like stews for which the diggers developed a ready taste. The miners were unable to pronounce the trade-name of the mixture, so it was soon dubbed “Billy,” and in this way was struck the name that was soon to be adopted to distinguish the “Bouilli” brand of provisions. (“Bouilli” means boiled meat It is in the English dictionary.) The tins that contained the mixtures were of a very handy size and, when empty, many found use as water-boiling vessels. That they made suitable kettles and teapots was thus an automatic discovery. And so the “billy”-can was gradually introduced into general use.

A quick-witted fellow, anticipating that it had arrived to stay, decided at once to arrange for the factory manufacture of cans of similar pattern, and before long there appeared on the market the billy-can, pint-pot and quart- pot with neatly made lids and wire handles. Today they are sold in all sizes throughout Australasia and beyond by the millions: still simple, they remain much the same in shape and size as they were decades ago. Like a smoking pipe, the billy is not at its best until it becomes stained and blackened with usage—or, as the sundowner says, with “experience.”

Billy-boilng contests used to be popular in the Australian bush. The older the billy the quicker it boils. Experts carry billies burned to tissue- paper thinness, keeping them in calico coverings. Such billies will boil in two minutes. The competitors in these bush contests are required to gather leaves and wood, light fires, race to the creek and fill their billies, put them on and stoke the fires until the cans have boiled. Surreptitiously dropping a stone into another man’s billy is an old camp-fire joke. When the other quart-pots are boiling the “doped”‘ billy has still a long way to go, and the owner usually cannot understand it.

The Australian stockman’s outfit should include four billies—of four quarts, three quarts, two quarts and one quart capacity; they fit inside each other, so that the set can be carried by one handle. The largest size is used to carry water from the creek to the camp fire, the next to boil the mutton, the two-quart to hold the vegetables, and the smallest for tea.

To boil a billy quickly, place length-wise on the ground a petrol tin and cut in it a round hole just smaller than the billy; then cut out from a side of the tin a square large enough to accommodate the sticks. Next punch small holes all around the tin so as to create a draught and when this has been done make a fire inside and place the billy over the hole. The billy is an essential part of every bushman’s equipment. The original round, squat type is still the most popular, but several ingenious “improvements,” including convertible and collapsible types, have been placed on the market. The drover’s battered tin quart-pot is part of him. Being wider at the bottom than at the top, it is steadier and exposes more surface to the flame. A folding handle at the side enables it to be pushed into the fire, a mug fits into the top. The three-pint size is in most demand. A two-pint size is often carried inside it.

The average bushman considers billy tea the drink of drinks. Even many wealthy squatters, while out on the run drafting and dipping, &c, prefer it to the kitchen-brewed tea—providing it is properly made. For there is an art in preparing good billy tea.

Effort was once made to affix the trade name of “camp-kettle” to the billy-can, but it failed. Australians prefer the old tag. Henry Lawson’s famous “While the Billy Boils” should always remind us of the tradition that clings to the simple invention —an Australian heritage!