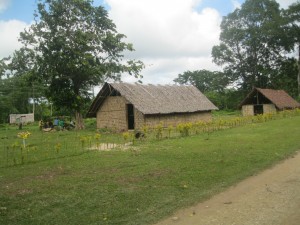 The Toyota Hilux bumped its way along the dirt track that leads to Lakruja Village on the island of Espiritu Santo in Vanuatu. We were a group of twelve from Brisbane, en route to visit the French school in the remote village. We had set out from where we were staying in the Village de Santo Resort on the outskirts of Luganville, the only major town on the island, in two vehicles, the ubiquitous pick-ups where passengers ride in the open back tray. Many in the group are not as young as we used to be, and it was a struggle for some to heave themselves over the side. On the way to the village we crossed one of the four airports built by the Americans during World War Two. The blue/black macadam was barely visible under the invading canopy of regrowth that was reclaiming the land.

We passed the occasional native hut ensconced in the forest. In parts, wide expanses of large-leafed macaranga draped in vines formed impenetrable walls on either side of the track. The sky was grey, but the rain held off. In early August, the air was heavy with humidity and the smell of raw vegetation and wet earth, while the temperature sat in the comfortable mid-twenty degrees Celsius range. More evidence of habitation became visible, we passed a tiny yellow concrete building which announced itself in bold letters as the shop. Everybody was relieved when we pulled to the side of the road and stopped. A timber-framed shelter stood in the large cleared area directly to the left; 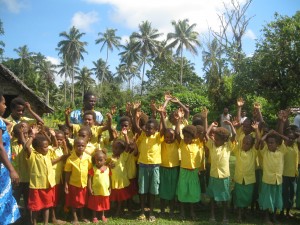 further along was a building we presumed to be the school. A number of adults were herding children dressed in uniforms of yellow shirts and green or red shorts/skirts into some semblance of order, their huge eyes fascinated by the sight of a motley crew of whites emerging from the vehicles. Sore backsides were rubbed, muscles stretched, necks un-kinked.

The school we were visiting had been going for a year and had 41 students enrolled in Kindergarten and Year 1. The project is being financed by the Millennium Cave Tours run by the villagers. “Education is far from free in Vanuatu and the cost is prohibitive for children in the outlying villages where the people grow fruit, vegetables, chickens and pigs to survive, and have little in the way of money,” our guide Sam Andikar explained. However, the villagers are recognising the necessity of education if they are to be part of the world they see changing around them.

Our trip had been organised by Bev Anti from the Resort, and Sam, director of the cave tours. Rose and I had been in Vanuatu the year before, and the idea of bringing a group of Rose’s French students to the island took root. So here we were, students – two with their husbands in tow, a friend and ourselves, waiting by the roadside to be greeted by the pupils, their teachers and the chief of the village. Finally, all was ready. “We can go in, now,” said Sam, ushering us across the track. We advanced one by one and the children draped colourful leis of native plants around our necks. We placed the gifts we had brought with us on a table in the open and were served green coconuts with a straw to drink the delicious and refreshing milk. Sam introduced us to the villagers and the chief, who welcomed us to the village. “Put your hands on the donations,” Sam told us. “It is part of the custom when giving or receiving gifts that both parties do so.” We nudged forward with the two lady teachers, Madam Irene and Madam Germaine, and stretched out to touch the books, dictionary, scissors, crayons, paint brushes, rubbers and various other items including a small laptop computer we had brought along. “The village has a generator, so they will be able to use the computer,” Sam assured us.

After the presentation we proceeded into the school hut which was set up with small tables, ea 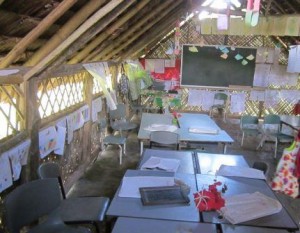 ch surrounded by four chairs on the concrete floor and a black board at the front. White pages covered in coloured words decorated the walls. The hut was about eight metres long by five metres wide and was built in the traditional way from bamboo with thatched roof and walls. One of the women from the village had earlier demonstrated how palm leaves were threaded together to form an impermeable layer. The inspection over, we moved outside where we were offered fresh coconut meat.

A short time later we were invited into another building behind the school. We were led to chairs at the front facing back towards rows of benches filled with the children, and adults behind them near the door. The children sang songs in French and Bislama and our group responded with a few songs in French led by Rose. We also sang “Waltzing Matilda,” which I was obliged to translate into French. The villagers sang the Vanuatu national anthem and then lunch was served. It consisted of an entrée of paw paw, a local variety of apple, cucumber and grilled corn on the cob, followed by a Boonya, a traditional dish wrapped in leaves and cooked in a fire in the ground. Rose, Jan and t 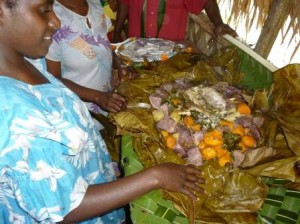 he teachers held the food bundle between them to mark the sharing of the meal. Two ladies unwrapped the leaves to reveal large violet chunks of taro, orange sweet potatoes, cabbage leaves, jellified cassava and chicken. A huge tub of rice was placed on the table. The children sang as they watched us eat and it wasn’t until we had finished that they were allowed outside where they were fed from cooking pots in the shade of a large tree in the centre of the ground. Some of the adults shared the leftovers in the school. The school ground had once been part of an American military base, but the villagers had had to clear the jungle that had buried it. Among the many stumps that remained sat rusted crumbling bundles of barbed wire left by the Americans.

After copious goodbyes, we climbed back aboard the vehicles and continued a few kilometres along the track to another village. Here we were shown into a small hut that served as a preschool and met Madam Rolando, the teacher. The room was much humbler than the one we had just seen. The children sat on woven mats on the uneven earth floor and resources were virtually non-existent. Once outside, Jim engaged the kids in a game of soccer – it was something to see the smiles on their faces.

This experience was an eye-opener for many in the group. Here in Australia we take education for granted, yet still rail at the cost of uniforms and books. We never question our right to a school, teachers and resources. In Vanuatu, education is reserved for those with money, which means for most, having a regular, paid job. However, eighty percent of Ni-Vanuatans rely on subsistence farming and there is insufficient money to send kids to school. This initiative by the villagers to create their own school, and therefore a better future for their children, needs support. Our support, to help make it happen.

One thought on “School in Paradise”