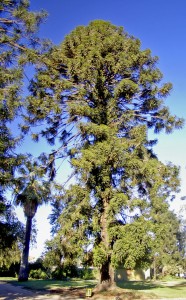 Before the arrival of the white colonists, the bunya pine was of significant importance to the Aboriginal people of South-East Queensland. Despite its name, the bunya pine (Araucaria bidwilli) is a conifer and not a true pine. The genus name Araucaria has its origins in the word Arauco, an area in Southern Chile where the monkey puzzle tree (A, araucana) grows. The second part is named after the botanist John Bidwill the first “scientist” to describe the tree in detail. The first whites to see the bunya pine were escaped convicts in the 1820s. According to Constance Petrie in Tom Petrie’s Reminiscences of Early Queensland 1904, her grandfather, Andrew Petrie, first discovered the tree and gave some specimens to Bidwill who sent them to England where the tree was named after the botanist, rather than Petrie.

The bunya is endemic to Queensland, being found in the south-east of the state and in two small stands in the far north. The tree is thought to have a life span of 600 years; it occurs naturally on basaltic soils and in areas where the annual rainfall is greater than 1000 mm. The conifers are considered to be very ancient with relatives dating back to the Jurassic period, 175 million years ago. The tree can grow to a height of 45 metres with a diameter of 1.5 metres while the branches form the shape of a dome.

Every three years, the bunya pines produce an abundant crop of nuts packed into a cone bigger than a man’s head, and capable of cracking the head if it happens to interfere with the cone’s descent when it eventually falls from a high limb. Roasted in the coals, the nut is delicious and the Aboriginal people loved it. The Aborigines considered the “bon-yi” as they called it as sacred. When a multitude of nascent cones appeared on the trees, messengers were sent far and wide to invite everyone to a great feast in the Bunya Mountains and the Blackall Range. Each tree was owned by an individual and no one      else was allowed to harvest the nuts; the “owner” would climb the tree using a vine and toe holes cut in the trunk though Tom Petrie said that the Aborigines would never have cut a tree and only used a vine to climb. People came from as far south as northern New South Wales and north to Bundaberg, numbering 600 to 700 in the Blackall Range but perhaps in their thousands in the Bunya Mountains. The nutritious nut was eaten either raw or roasted, though it was not the only food eaten during the festival.

The Bunya Mountains, that means our Mothers’ breast – Boobarran Ngummin. This is a very sacred place. To us it is equal in status to Uluru. To all the tribes of South-East Queensland and Northern New South Wales it has been very significant, in fact for thousands of years, perhaps 60 000 years and that’s a long, long time. Our people would gather at the Bunya Mountains from these areas. It is very important that we get the right perspective on these gatherings. Some people think it was just to gorge on bunya nuts. No, it was very deeply spiritual arousing of ceremony. We went to suck the breast of our Mother, who gave us this, the spirituality that was so intense that it was part of our bearing in this country, our Mother Australia, the Earth. We are sucking the breast, sucking the milk, the bunya nut, from her. 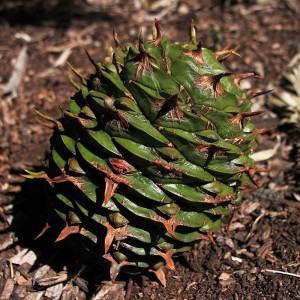 The festival was a huge celebration featuring corroborees, exchange of news, trade, marriage arrangements and fighting. Popular belief held that the Aborigines were cannibals and would feast on those who died in the fights or from disease and old age; some people went as far as to say that they made sacrifices as well.

There seem to be few written accounts or legends about the bunya; the only legends found were presented by John Mathew in Two Representative Tribes of Queensland, 1910:

The Bonyi (bunya) and the Kuloloi (cypress pine) being rivals, at one time had a great fight…Then they began to fight and Bonyi speared Kuloloi low down, hence all its lower branches are like spears. As for Bonyi, it was speared high up, which accounts for the lower part of the stem being clear of branches to this day.

The Revengeful Lover, or How the Nicks Came on the Wild Plum

There was once a Bonyi that fell in love with a dainty little tree called Kulvain, which bore a bluish-black fruit like a plum. So he went to Kulvain’s father thinking he had only to ask and the girl would be his and he said unceremoniously…[ The father refuses and Bonyi is enraged] Bonyi then slashed away at Kulvain’s father, and that is why the fruit of the Kulvain is marked all over with nicks at the present day.

The widely available scientific details about the bunya pine are indisputable for the most part. That the bunya is ancient seems beyond doubt; however the facts concerning its evolution are contentious due to the difficulty of obtaining exact information from fossils. Tests done on the nut show it to be a rich source of carbohydrates, and therefore confirm its importance as a seasonal food source to the Aborigines. Scientific knowledge of the bunya is of great help to westerners in a pragmatic sense. Yet the doors are closed on the metaphysical aspects of Indigenous knowledge, which are deemed beyond the realm of scientific endeavour and therefore of little significance. Perhaps the most important document concerning Aboriginal contact with the bunya is Constance Petrie’s recording of her father’s experiences. His eyewitness account of the actual festival is of great value as a historical record, though there may be some inaccuracies due to Petrie’s memory of events.

There is much more scientific information than Indigenous knowledge regarding the bunya. It could be argued that westerners are obsessed by detail and that we have the technology and means to satisfy our curiosity. Science is only interested in instrumental values and the benefits that can be gained from knowing something scientifically as opposed to the Aborigines who venerate nature for its intrinsic value as well. The dispersal of the Aborigines led to the demise of the bunya festival towards the end of the nineteenth century. Aboriginal knowledge and tradition was handed down orally from generation to generation; the destruction wrought by the colonists on Aboriginal society has meant that much knowledge has been lost. Much Indigenous knowledge is secret, only available to initiates and therefore beyond the reach of westerners.