The following review has just been posted on the website Throw the book at us.

Turrwan means great man, and this book is a fictional account of a great man. The story begins and ends in 1909; set mainly in South-East Queensland. The leading character is based on the real-life figure of Tom Petrie. We watch Tom grow from a boy into a man in this harsh land, and build his own unique character and understanding of the world. His family and a ruthless, vindictive convict named Grayson play strong parts in this book, but the heart of the story is about someone who tries to and does understand, protect and care for Aboriginal people and their culture. It’s an adventure story, a love story, and a story that is about the life of a great man and humanist.

Richard J Carroll knows how to write and how to tell a clear and entertaining story. His writing is very effective, and professionally constructed and edited. He communicates in a deft, subtle manner that reminds me of the likes of Patrick White and Kate Grenville.

His writing is a pleasure to read and he has a distinctive style. The story he creates in Turrwan is a clean, easy to follow construction. The parts that really shine are his portrayals and understandings of Aboriginal people and their values.

Throughout the book the main character, Tom, battles with the harshness of the colonisers and the confusion surrounding of what is right and wrong for survival in this land, as the laws of a new world are imposed on a traditional people.

Tom develops close friendships and a love for the Aboriginal people he encounters. Even though some are against him, he recognises why and tries to make the best of every situation. When he falls in love with a young Aboriginal girl called Karawara, both the Aborigines and his family are unsure of this union, but then it ends tragically, and this changes Tom’s life.

He goes out into the greater world than what his territory offers him, and does what many men did at that time. In gold fields, pubs, confronting weather and conditions, he tries to block out what happened to him – but can anyone ever succeed in doing this?

Tom finds love again later on in the book, and they start their new, self-sufficient life out in the bush. But old situations and enemies come back to try and take his life away.

This book was a pleasure to read. I only wish more first-time authors could write like this. I’m surprised it was not picked up by one of the major publishers. Turrwan is Carroll’s first book and I’ll certainly be looking out for his next. 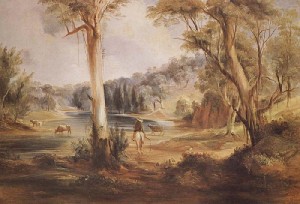