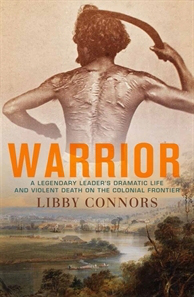 The relationship between blacks and whites on the early Queensland frontier is a major theme of Turrwan, so I was delighted when historian Libby Connors published Warrior earlier this year. Connors’ work is a significant contribution to this state’s historical record and while non-fiction may not be everyone’s cup of tea, I can thoroughly recommend Warrior if you are an amateur of Australia’s past and the “non-war” the Aboriginal people waged against the invaders of their country.

Connors explains how the different tribal groups of South-east Queensland interacted and reacted to the white presence on their lands. She points out that British policy was to treat the Indigenous people as citizens of the empire and therefore subject to colonial law. However, the majority of politicians, bureaucrats and ordinary citizens were incapable of recognising, let alone understanding, that the native peoples had their own system of traditional law with all-encompassing guidelines that had to be followed. Neither could the Aboriginal people understand the whites who came unbidden to their lands, an unthinkable breach of etiquette under Indigenous law.

With the closing of the penal colony and the opening of Brisbane to the general public in 1842 came an influx of new settlers which led to an increase in conflicts between the opposing factors. Dundalli, the central figure in Warrior, was a Dalla man from the Blackall Range inland from the Sunshine Coast. He was a lawman given the task of resisting the invaders and organising payback for crimes committed by the whites against his people. The notion of payback is central to Aboriginal thinking as it preserves the carefully constructed balance of their culture and society. If harmony is not restored through an act of retribution, the door to chaos and the disintegration of their way of life is thrown open.

Connors skilfully outlines Aboriginal and white politics, highlighting the conflicts between the different Aboriginal groups themselves and how this led to certain tribes using the whites to punish their traditional enemies. Dundalli was a big, powerful man greatly feared by both the whites and the Brisbane Aboriginal people – it was a member of this last group who eventually betrayed Dundalli to the police. Dundalli, a hero to the Aboriginal people to the north of Brisbane, was arrested and imprisoned for six months before being brought to trial. Evidence of a dubious nature was presented and deemed enough to sentence him to death. He was hung in Queen St where the GPO stands today, exhorting his people to exact revenge on the man who denounced him.

Life on Queensland’s early frontier was fraught with uncertainty and danger, fear and violence. Connors has done a wonderful job of unravelling the complexities and nuances of the white invasion and Aboriginal resistance, the writing is fluent, the narrative compelling.

PS I had to smile when I saw the cover for Warrior as I had thought to use this same watercolour by Conrad Martens for Turrwan.