The straps of my backpack dug hard into my shoulders as I trudged zombie-like in the sweltering heat. I was hitch-hiking across the island of Crete and had been dropped off in a small village miles from anywhere. A number of houses and sheds nestled beside the main road, but motorists hardly seemed to notice their presence as they rushed by in a cloud of dust and roaring motor without a sideways glance. I walked to the outskirts until I found a spot on the road where cars could pull over, and dropped my load to the ground with a sigh of relief. A low stone wall and a few sparse shrubs provided the only shade, but it would have to do because my legs felt like jelly and refused to go any further. 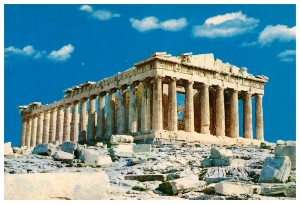 After several hours under the relentless sun, I was beginning to wilt and thought I’d never get out of the place. It was slow going trying to get a lift in Crete as there were few cars. And those that did come, hurtled past me, unstoppable express trains. The village seemed to be asleep, the population swallowed by the imposing stone walls of their houses, the only sound the constant thrumming of countless cicadas.

A movement in the shimmering air caught my eye. Coming down the street from the centre of the village was a woman, clothed in black from head to toe. She was middle-aged, the olive skin of her face bore the marks of the elements and the passing of time. She was carrying something in her hands, maybe a tray I thought, covered by a spotless white cloth.

Imagine my surprise when she came directly up to me and offered the tray accompanied by a torrent of incomprehensible Greek. I had no idea what she wanted until she lifted the cloth to reveal a loaf of freshly-baked bread, whose rich aroma filled my senses, evoking the image of my uncle’s bakery and the smell I adored as a child, of loaves direct from the oven. A block of Fetta cheese, tomatoes, olives and a bottle of orange juice decorated the tray. I was flabbergasted. As I took the tray I tried to thank her with my few words of Greek, but she waved me away, turned on her heel and headed back the way she had come. Still in a daze, I sat down to my feast, famished. I unfolded my knife and cut the bread. Food had never tasted so good.

I was deeply touched by the generosity of this unknown woman who had gone out of her way to be kind to a passing foreigner, especially so in my case as I had long hair, a bushy beard and dusty clothes. More than 30 years after the event, I still recall this moment of kindness with great humility and endless thanks. To know there are selfless people in our troubled world kindles joy and hope for the future.

One thought on “A Welcome Stranger”