While the colonial history of Australia has been widely represented in fiction, from Marcus Clarke’s classic For the Term of His Natural Life, first published in 1870, to Kate Grenville’s The Secret River (2006), Brisbane has been largely neglected.

The first Queensland novel, Fern Vale, or the Queensland Squatter, by Colin Munro, was published in 1862. Set for the most part on the Darling Downs in the years before separation in 1859, the book is a pastoral romance which describes the social interactions between squatters, and the treatment of the Aboriginal people. At one stage, one of the characters passes through Brisbane, but nothing is said of the settlement. It was not until 1881 and the publication of Politics and Passion, by Rosa Praed, that Brisbane appeared in fiction. Although Praed’s book is only partially set in Brisbane, it is important because it is the first novel to make reference to the city at any length. Politics and Passion is the first of 16 books set in ‘Leichardt’s Land,’ which represents Queensland after it became a separate colony in 1859. The author describes Brisbane as follows:

Leichardt’s Town is curiously situated upon three peninsulas, lying parallel with each other, and formed by the snake-like curves of the river which divides them. The city lies in the middle, and is called the north side in contradistinction to South Leichardt’s Town, with which it is connected by a bridge, while Emu Point, the suburb where Mrs. Vallancy lived, faces it again on the opposite bank.

Praed, who was born and grew up in Queensland, explores life on the

frontier, squatters, politics and relations between black and white in the expanding state. Growing up, Praed’s ambition was to escape and go to Britain, a theme later explored by David Malouf and others in writing about Brisbane.

Only a handful of novels with Brisbane as the principal setting were written before the end of the nineteenth century. According to the John Oxley Library (JOL) website, The Curse and its Cure (1894), by Thomas Pennington Lucas was the first novel to be set in Brisbane. In the first volume, The Ruins of Brisbane in the Year 2000, a man sailing up the Brisbane River in the early twenty-first century tells the story of the city’s decay. The narrator describes a civil war between Queensland and the other states, the massacre of the Aboriginal people, the 1893 floods, and the ‘curse’ that leads to Brisbane’s downfall—the selfishness and greed of the people. Volume two, Brisbane Rebuilt in the Year 2200, describes how ‘the city is rebuilt with love and transformed into a Christian utopia of peace, prosperity and good health’ (JOL).

However, I believe that another work of fiction set in Brisbane predated The Curse and its Cure. In 1888, William Lane published White or Yellow? A Story of the Race-war of A.D. 1908, a work of speculative fiction, in serial form in the Boomerang. In the novel the Chinese take over the parliament in Brisbane in 1908, but are eventually expelled by an uprising of the white population. Towards the end of the nineteenth century, Lane was an influential figure in Queensland political and literary circles. His work reflects the ‘repressed violence’ and the ‘pathological national need’ in Australia’s search for identity. In White or Yellow?, John Saxby, one of the leaders of the white revolution to expel the Chinese, proposes a solution to the problem, which is adopted by all and implemented:

‘Let us strike while the iron is hot and before they are ready. Let
us terrorize them so that they will never recover. Let us convince
them that we are desperate and that their only chance is to obey.
We can fire Chinatown. . . . We can burn down every Chinese
store and house and plough up every Chinese garden. We can
hang every white man who is a traitor to the whites in this war.
And we can start to do this throughout Queensland, perhaps
throughout Australia, this very night.’
‘And the Chinese themselves?’ queried Dow, while the other committeemen leaned to listen breathlessly. 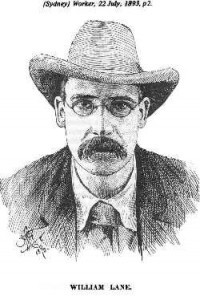 This genre of narrative found its roots in public paranoia and contributed to a fear of being invaded that can still be felt in the present. Perhaps White or Yellow? has been forgotten and not recognised as the first novel to be set in Brisbane because it appeared as a serial, and even more so because it was an obviously racist invasion story.

Another candidate for the first novel set in Brisbane could have been The Land and the People published by W. Edward Graham under the pseudonym Austin South in 1891. However, only two chapters of a work in the vein of Lucas’s futuristic utopian Brisbane were published and it is not known if Graham ever finished the novel. The next novel to be set in Brisbane was The Dishonourable (1895), a popular courtroom drama and murder-mystery/romance that takes place during the devastating flood of 1893. Its author, John David Hennessey, explores the corruption that was rife in the worlds of politics and business in the city at that time.

In a future post I will look at other authors who have written about Brisbane including Brian Penton, David Malouf and Jessica Anderson among others.