Almost a year has flown by since I wrote a post called “A New Direction: Revisiting the Petries” where I announced my intention of writing a sequel to Turrwan. I have just put the finishing touches 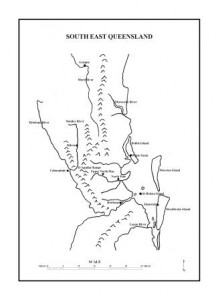 to the manuscript I have called Red Gold which continues the story of Tom Petrie and his family from the early 1860s to the 1920s. I have created a couple of nasty villains to persecute the family across the generations and continue where Grayson left off. I am now waiting on some professional beta readers to send me their feedback before submitting it to publishers.
This time I have included a map of South East Queensland in Red Gold to make it easier for those readers who do not know the area to situate the action. I searched all over for an appropriate map but found nothing and decided to create one myself. I loved making maps as a kid at school and used techniques I had learned then to trace an outline of the coast and rivers which I scanned into Photoshop. With the help of my son, Shane, we made the map above.